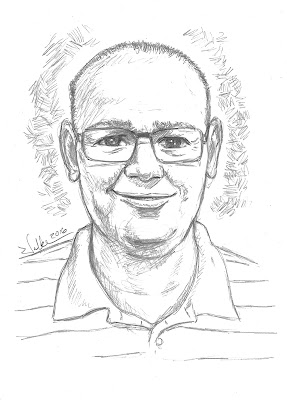 I HAVE A lot of friends, which anyone who knows me would agree to. I’m one of those people who you can’t walk down the street with, practically any street, here in Pittsburgh without someone calling out my name. I have artist friends, and comic-book fan friends, and friends from various neighborhoods (as Fred Rogers demonstrated long ago, neighborhoods are all-important in Pittsburgh), and friends from various workplaces. The latter is a particular source of pride for me. Over the years, I managed to forge incredibly solid friendships with people I worked with. I’ve designed their wedding programs and even been in some of their weddings, babysat their children, and had at least one child (so far) named after me. I’ve been adopted into numerous families, and laughed and loved and cried with them. My places of employment changed, but I’ve still managed to stay close to scores of these people who support me every day.

My sister Jami is one of them. I call her sister because she has been that to me, and much more. We worked together at two different places, and know each other through and through. I was adopted into her family, the Marlowes, while in my twenties, and had no idea of the depth that this relationship would develop. Through her, one by one, I met the other Marlowes, and each one embraced me without reservation. Billie, the matriarch, adopted countless kids via her own kids, and you always knew that she cared about you. She even had a phrase related to her children I’ve taken to heart: “I love all of my kids equally. But sometimes, one might require more attention than the others.”

Think about that. Isn’t that the smartest way to spread the love around? By not worrying about comparative volume, but instead focusing on the need, we address what really counts. And Billie let you know you were loved, even when she cracked the whip. She fed her kids and kept them stuffed, and she made everyone laugh. I made a drawing of her once at a party, just a quick sketch to pass the time, and tried to capture that vivacious spirit. She loved it so much that it hung in her home for years afterwards. When she passed away, the Marlowes used it as the cover image of Billie’s memorial program. I’ve rarely been so humbled and flattered. But it goes to show that a few moments can mean a lot over time.

Another Marlowe family member I met was Jami’s brother-in-law Jake. His last name wasn’t Marlowe, but for all intents and purposes, he was a Marlowe and he knew it. I think he was proud of that. The very first time I saw him, it made an impression. I’d been commissioned, via Jami, to draw a portrait photo of her young niece Denise (yes, we’ve made many jokes about that cadence) who was taking dance lessons at the time. This is back when Jami and I were working for the same company, but at different locations. She called my store one day to inform me that Jake was in town from West Virginia and would be stopping by to see me, as I recall to drop off reference photos of his daughter to draw from. He was described as a big, tall man, who would probably be wearing boots which made him even taller. He sounded like a good ol’ country boy with a genial nature. That’s exactly what he was.

Eventually, the front door beeped opened and made every coworker snap to attention, and Jake walked into the store. The second I laid eyes on him I thought, “Yeah. That’s a big guy.” Whenever I think about this initial encounter, I always remember the impression he made in that moment, basically filling up the store. There was never anything more complicated about Jake from that moment forward. This was a very open and genuine person. What you saw was what you got, and what I got in that first encounter was a sincere man who was very enthusiastic about celebrating his family. That never changed.

What I had no way of knowing was how what I saw and got was what everyone else who knew him was seeing and getting too.

Classical Music, Inspiration and the Importance of Superman

The following post originally appeared as a guest blog on the Pittsburgh Symphony Orchestra's PSO BLOG. Special thanks to their Director of Media Relations, Joyce DeFrancesco, for extending the invitation to contribute!

*          *          *          *          *
SYMPHONIC AND CLASSICAL music entered my world when I was eight years old. It wasn’t in a particularly sophisticated way – if one goes in for notions of art belonging to “high brow” and “low brow” classes, which I don’t – but rather the same way it does for a lot of people. I was exposed to it through the release of a specific film which resonated with me before I’d seen a single frame: SUPERMAN: THE MOVIE. I had already been a fan of the Man of Steel for half my life, and was at the perfect age to see that film. SUPERMAN was big and full of spectacle and it perfectly brought to life a character I needed in my topsy-turvy home life. Much of my early years were characterized by dysfunction and instability; Superman always delivered the opposite of those elements, wherever I encountered him. He was always strong, smart, caring, and dependable. These traits immediately made him my lifelong hero.


Reading his adventures in comic-books directly inspired me to start drawing, which in turn became my lifelong profession. I realized that most people decided what careers they wanted to have as adults only as they got older. Some wanted to be doctors or police officers, and some wanted to be firefighters or astronauts. My mother was a gifted musician, and her siblings and their children always said she had “the gift” of being able to naturally play the piano in church from a very young age. I ended up taking a cue from my father, who had visual arts talents, which led directly to my exposure to comic-books and the worlds of superheroes. Every time I opened the covers of another issue, I knew, without question, that making stories with my own artwork was what I wanted to do with my life.

Other media reinforced this notion. I watched cartoons and television, like every other child, and Superman and his cohorts were there as well in various incarnations. Reruns of the 1950s television show The Adventures of Superman brought a different kind of thrill into the living room. I instantly memorized the opening title march and heroic music became synonymous with the character. In much the same way, The William Tell Overture had, over time, became synonymous with another fictional hero who also had a tv show in the ‘50s, The Lone Ranger. Unlike that western hero, however, Superman merited his own original music, and no one understood this more than composer John Williams. Having just scored a hit, literally, with the soundtrack of the original STAR WARS, Williams then turned his attentions to helping us all believe a man could fly. His results have since proven to be one of the most impressive special effects to have ever been derived from comic-books.