I am an award-winning graphic-prose creator and expert in social applications for comic-book art. Based in my hometown of Pittsburgh, PA, my freelance artwork specializes in illustration, graphic design, graphic-prose (a.k.a. comic-books), creative writing, and photography.

I work for The Holocaust Center of Pittsburgh as Lead Artist and Project Coordinator for their acclaimed ongoing comic-book series CHUTZ-POW! SUPERHEROES OF THE HOLOCAUST. I am also currently President of the Board of Directors at Pittsburgh’s ToonSeum, The Museum of Comics & Cartoon Art, where I also instruct workshops and have contributed artwork to their NORTH and OAKLAND anthology comic-books.

I am the creator/writer/artist of the comic-book HERO CORP., INTERNATIONAL, a mash-up of the workaday worlds of superheroes and the machinations of corporate America.

I graduated from the Art Institute of Pittsburgh and, from 1993 to 1999, was an art instructor at the Pittsburgh Center for the Arts where I taught comic-book creation classes and workshops.


Projects I've created artwork for include HEROES AND INSPIRATIONS for The Pittsburgh Symphony Orchestra, VEGGIE HEROES for The Greater Pittsburgh Community Food Bank, COMIC-TANIUM! SUPER MATERIALS OF THE SUPERHEROES for The Minerals, Metals and Materials Society, as well as work and commissions for private clients. I have written graphic-novel reviews for the Pittsburgh Post Gazette, and provide independent consultation for prospective comics-related projects.

In Spring of 2016, I became one of five recipients to receive an award from the Advancing Black Arts in Pittsburgh program, made possible by a partnership between The Pittsburgh Foundation and The Heinz Endowments. In addition, I received an Artist Opportunity Grant from The Greater Pittsburgh Arts Council which helped make possible my first solo art gallery show, TO TELL THE TROOF. This was featured throughout August and September of 2016 at Most Wanted Fine Art Gallery in Garfield.

In 2017, I was voted Best Local Cartoonist by readers of The Pittsburgh City Paper in their Annual Best of Pittsburgh Poll. In 2018, I was awarded a BMe Community Genius Fellowship in recognition of his work in the arts and related community activity. 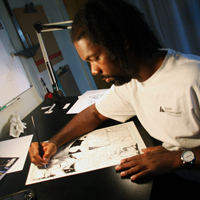