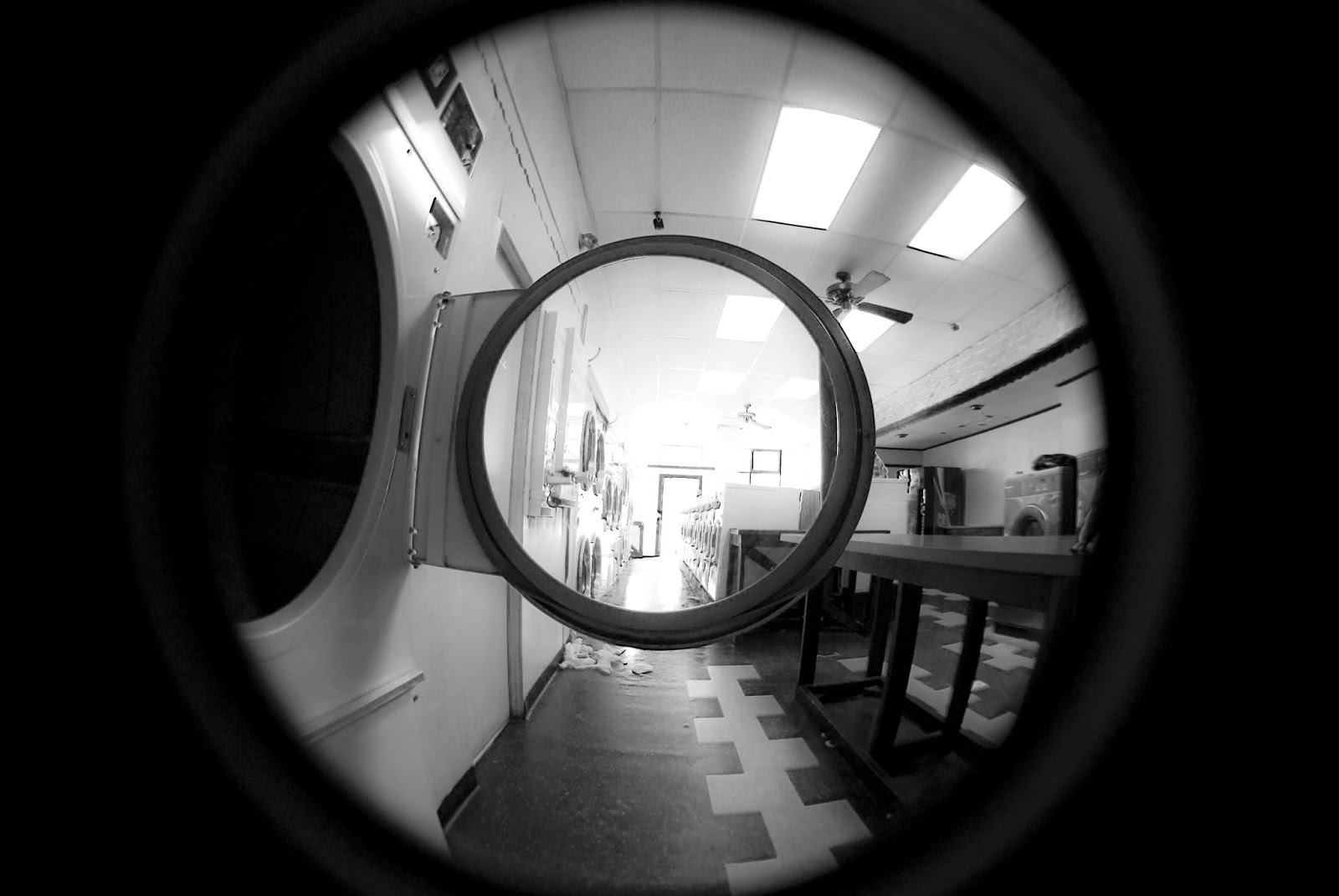 One of the cleanest places any of you could ever hope to visit is my local laundromat immediately after I've been there to wash my clothes. To be a bit more specific, you want the exact square footage that I try to stake a claim to every time I visit. I arrive early in pursuit of this rarefied territory, typically before sunrise, sometimes running a reconnaissance lap around the block to make sure my coveted machines are available. I like the big full-load washer in the back - the one on the right side, which still works - which sits directly across from the two large dryers, and again it's the one on the right side that works.

If the owner of the laundromat wanted a minute of internet fame, he would cobble together time-lapsed surveillance footage of me - throwing away garbage left on machines and the floor, sweeping up messes, depositing forgotten socks, undies and brassieres to an Island of Misplaced Apparel, wiping down and drying my large folding table of choice - and post it on YouTube. The manic germophobia behind my public laundering is completely true.


Early yesterday morning, I sat comfortably ensconced within my germ-free no-flies-on-me zone, reading a book, listening to my iPod, and waiting patiently for 2.5 loads of laundry to finish drying. No one else had entered in the entire time, except for the owner who had run through to collect money from the coin machine, and then vanished. This was typical, and one of the reasons I made the effort to get there so early.

The first dryer finished, and while I was unloading it the iPod reached the end of its playlist and went silent. I kept scooping out clothes and decided to wait until I began folding to search for more music. The basket grew heavy, and I hoisted it up and pivoted around to the lip of the table. In that split-instant, I caught the barest glimpse of someone silently standing on the opposite side of the table.

I had barely registered him as being there, and was trying to process if the owner had returned for some reason, when this person immediately launched into conversation –

“We finally got us some nice weather here, huh?”

– and I almost dropped my basket. (To confirm your suspicions, if that had happened, I would have been obligated to re-wash any clothes that hit the floor.) It was not the owner. It was a panhandler, and he had breached my perimeter with the stealth of a black ops agent. He was grungy, and had attained a level of perpetual intoxication that he would possess for the rest of his days. After he stood there for several seconds I also realized that he smelled exactly as bad as he looked. I huddled next to my freshly laundered clothes to mask the scent of fermentation.

I wasn't really angry, but instead bemused that this had all happened so quickly. He didn't notice my reaction, and began a monologue that would go pretty much uninterrupted for the duration of his visit. He set two dingy canvas shopping bags on my clean table and I could practically see the microbes and bacteria disembarking and spiking flags on their new homeland.

A pang of defeat went through me as I carefully started folding clothes on my end of the table. Panhandling in a laundromat is a shrewd move: everyone there has at least some change, and probably no place to escape. I began my mental stopwatch and waited for him to initiate the money-for-privacy barter, but he never did. He just talked about how the nice weather finally allowed him to get warm. The winter had been hard on him, since he was homeless and living in his truck which was by his telling, down by the 40th Street Bridge.

Then he talked about his plans for the day. He had a friend who was going to give him some money later. Not much, just enough to squeak by for a week or so. He would catch a bus up to Bloomfield where he would meet this person, and get a drink, and hang out with the bartenders who liked him. This segued into his love of the alphabet and how he’d mastered repeating the alphabet backwards in less than three seconds. He did this for a reason: it was his goal to get into the Guinness Book of World Records for this feat.

He asked what I did for a living and derived from my response that I was intelligent. “Graphic designer, huh? You went to school for that didn't you? What, two years? Four years? Yeah brains are good.” He then went on at length about his admiration for those with knowledge and intelligence. “God gave us brains with billions of neurons. Our brains are made up of billions of neurons. Ain’t that something? Billions of neurons.” He paused for a brief moment. “Of course I've killed a lot of mine by drinking!”

I burst out laughing at this and recognized this trip to the laundromat had gone from being a symphony of agitation to one of the most instructive interactions I would have all week. The wandering panhandler was dropping intermittent smart bombs of profound substance on the topics of God, brains and the pursuit of knowledge, sexuality, and the destructiveness of alcohol. There was a cyclical nature to the way he spoke of these things, and he would see-saw back and forth on nearly every subject.

“God’s been good to me. He gave me a mighty brain,” he said with pride. “God works through people every day, all over the world.” And yet, he noted, we had no proof of His existence. “That Hubble telescope shows that the Universe has been around for 14 billion years. 14 billion years, and we’ve still got no proof there’s a God. That’s a long time, don’t you think, for us to still have no proof that there’s a God?”

I volunteered my take on things. “I look at it like we’re blood corpuscles in a much larger body. I’m pretty sure my own blood corpuscles don’t know that they’re a part of me – but they are. And they’re all important, and I want them in there, doing their job. So I just take it on faith that’s my role in the Universe too.”

He sized me up for a moment, and said, “That’s a good analogy.” He pondered my words and repeated them. “Corpuscles in the body…that makes sense.” I felt oddly proud to have made this small momentary impact on him.

“You’ve got to have common sense,” he continued. “I’ve known people with brains but no common sense.”

I finished folding the basket of clothes, carefully keeping the stacks away from my funny but germ ridden companion’s end of the table. The second dryer tumbled its way toward completion behind me as the discussion continued.

“I’m gonna get in the Guinness Book of World Records one day. I can recite the alphabet backwards in less than three seconds…at least, I think it’s less than three seconds. One of these days I need to get one of them voice recorders so I can time myself. Sometimes I go to the bar up there in Bloomfield and they’ll get me to do it for their karaoke. I had the one guy say to me, ‘I’ll give you ten dollars if you can do it!’ Then the bartender said, ‘I’ll give you another ten dollars for doing it!’ And I did it too, boy!

He did do it – as far as I could tell – but it took longer than three seconds. I didn’t mention this, since he did a better job at it than I could have done.

He talked about things he found wonder in…

“Here’s five things I love about the tigers,” he said, and flipped open a notepad to show me his ponderings.

He talked about history…


“How about them Jews, huh? Yeah, Hitler didn’t like them motherfuckers.”

He talked about sexuality…


“I’m a little bisexual. I prefer women about ninety percent, and men about ten percent.” He seemed a little conflicted on whether homosexuality was okay in the eyes of God or not, and said he knew people who he believed were born gay, and others who he condemned for being sinners, including himself. He’d only started fooling around with men later in life, and even then just a little bit. I didn't challenge any of this, figuring he’s not the only person trying to make sense of such complicated issues.

“How old are you? I’m seventy-three. Do you have a girlfriend? I don’t have a girlfriend.” He paused again, and then continued without any self-pity. “It’s kind of hard for me to do, living in a truck, with only six blankets and no money.” He looked out the window. “I’d better get going. I've got to catch that bus to Bloomfield.”

I pushed a small stack of unused quarters across the table. “That’s for you. For reciting the alphabet backwards for me.” I figured I’d lost that much money to the washers and dryers over time, without half as much entertainment, so it was fair.

He smiled. “Hey, thank you. What’s your name?” he asked, and began gathering his things.

“I’m Ed. ‘Marcel’. That’s a good black name. I’m gonna have a drink later on and I’ll be thinking of you, Marcel.”

“And you can tell everyone that you met Ed, the Alphabet Genius!” He shuffled toward the door, said “I’m glad I met you,” and then his mighty brain was gone. His odor however stayed behind as a pungent reminder of his company.

When the other dryer pitched to a halt, I removed the load, glad that Ed had left in time for me to wipe down the table again and have room for the rest of my clothes. Within seconds, his soliloquy had already taken on the hazy half-remembered quality of a dream. I thought of his line about losing brain cells and laughed out loud again.

I don’t have any overarching moral to share with you about this exchange. But if you find yourself in a pub in Oakland or Bloomfield or Lawrenceville on karaoke night, and an old man steps to the microphone to recite what sounds like gibberish, take an extra second to listen closer. You may be privy to a vagabond trying in some small way to inch toward his goal, and billions and billions of goals like his are the lifeblood of the Universe.

And it's possible you might be able to say that you met a world record contender.

Then offer the next person at the microphone a disinfectant wipe.
Posted by Marcel at 4:26 PM