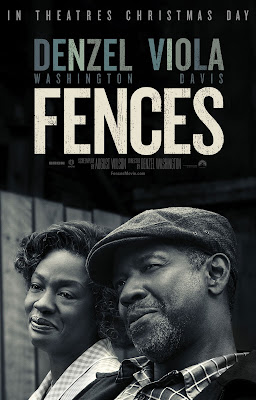 The movie’s script, an incredibly faithful adaptation of Wilson’s stage play, offers a view of Pittsburgh so specific it cannot help but to ring true. In the real world, the communities his plays depict in bygone days now fight to avoid erosion by gentrification and apathy. The Pittsburgh Cycle manages to bestow measures of dignity to even the most mundane cobblestones of these streets. Troy’s large personality entertains and intimidates the people in his world, and the insight of Wilson’s pen does the same for us. The people who populate his streets are quintessentially Pittsburghers, though they don’t speak with anything close to a yinzer accent. They don’t need to; they are at once specific and universal. These characters are Black and they speak and act with a poetic cadence unique to their experience, not quite real but authentic nonetheless.

Denzel Washington, as the film’s director, smartly uses the physical terrain to reinforce the story’s ties to its setting. The decision to film FENCES in Pittsburgh pays off handsomely in many ways, particularly for those of us from or living in the city. While large numbers of movies have been shot here – everything from INNOCENT BLOOD to JACK REACHER to WONDER BOYS to PERKS OF BEING A WALLFLOWER – few have truly captured the vibe of living in Pittsburgh. The Steel City is more often than not merely window dressing for other narratives, non-essential to plots, and only chosen to provide tax credits. This is typified by haphazard editing allowing cars to begin chases in one neighborhood, only to be spat out in others that don’t correspond. At no point in FENCES can we forget that we are anywhere except the author’s hometown. Sloping hills and spewing smokestacks and a familiar-yet-different Downtown skyline always remind us where we are. Even the backyards that the characters take momentary respite in look like backyards most of us can see from our bedroom windows, because they are. It’s the old city that we built this newer city upon, and we can feel it like a pebble in our shoe.

Virtually no previously Pittsburgh-filmed movies have used such impressive Black casts. For African American viewers in particular, watching this story unfold might feel like watching a family photo album come to life, in large part because of the performances which are consistently superb. We look at these characters with nostalgia, but no attempt is made to whitewash their flaws beneath the surface. FENCES is Black verisimilitude in the arts and it's wonderful. Washington and Viola Davis each won Tony Awards for their Broadway performances as Troy and Rose Maxson, and there’s an ease with which they reclaim their roles. Troy gains a very direct potency by virtue of the actor portraying him. When Denzel smiles and laughs with that bonafide star quality of his, he’s got you with him and he knows it. But the actor has aged, and he knows that too, and he uses it to bring a depth to his Troy that otherwise wouldn’t be possible.

It’s through the supporting characters that the audience is allowed to reflect upon the many parts of Troy. Davis’ Rose is a fascinating embodiment of the day-to-day joy and pain of Black women. She revels in her husband’s silliness, but when he wounds her with the ultimate betrayal, her response is palpable rage. The audience at the showing I attended cheered when she lashed back at Troy in this scene, nullifying his overly-self-important justifications with her righteous anger. There’s another moment when she sits in silence alone at her kitchen table, tired and resigned and weighted down by an unsympathetic world. In these two scenes, one exploding with blistering emotion, another steeped in fatigue, Davis is revealed as a master of her craft. The limitations and hurt of Rose’s world are laid bare and she, arguably more than any other character, leaves the most indelible impression. 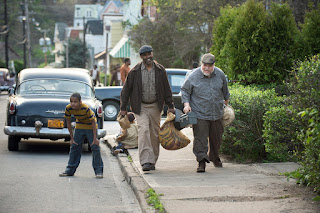 To Troy’s longtime friend and coworker Bono (Stephen McKinley Henderson), the lead character is ultimately a cautionary tale, often times entertaining, but also reckless and self absorbed. When we first see the duo, collecting garbage together beneath the opening credits, they have an easygoing rapport born from years of familiarity. Bono is Troy’s conscience and cheerleader, and he and Rose serve as fans in the bleachers allowing Troy to lament over the loss of his glory days playing baseball. While Troy constructs the film’s titular fence, Bono’s the one who explains that "some people build fences to keep people out, while other people build fences to keep people in." It’s meant to question the protagonist’s intentions, and like most good advice it’s unheeded. By the end of the story there is a discomfort between the men suggesting that Troy is unable to build his figurative fence wide enough to encompass the friendship.

Gabe Maxon (Mykelti Williamson) is the prism through which we are allowed to see Troy at his most vulnerable and self-reflective. While nearly every character in FENCES is nursing a wound of some kind, Gabe’s just happens to be at the surface. Having suffered a head injury during World War Two, Gabe’s government checks allowed his brother Troy to own a home, which he feels guilt over. Several times Troy delivers monologues about his ideas of responsibility – which his own behavior then contradicts – and this gives us a window into understanding why he feels compelled to look after his brother. But here we also see the limitation of what can be reasonably controlled. Gabe has already moved out of the family home when the story starts, and Troy continually says how he isn’t upset about it…but you feel that he is. Gabe is an ever-present, undeniable reminder of Troy’s own shortcomings and when he flees, screaming about unseen hellhounds, you know that both brothers are dogged by regrets they can’t outrun.

Brotherhood shapes another part of the narrative of FENCES. From the vantage point of Lyons (Russell Hornsby) and Cory (Jovan Adepo), Troy is an enigmatic and dominating father figure. Unlike with the others, he remains purposely distant from his sons and withholds affection. Older son Lyons, who grew up outside of Troy’s boundaries, seeks ways to climb back over the figurative fence and into their father’s good graces. Cory, who has conversely grown up confined by those limitations, struggles to find a way to escape that fence before the boundaries are extended. Both younger Maxsons seek their father’s respect as well as ways to define themselves as men. Lyons repeatedly asks Troy to come hear him play at the Crawford Grill, and Cory beseeches Troy to allow him to play football. Neither receives the approval from him they seek, and both rebel in their own ways.

The irony of Troy’s antagonistic perception of mortality is that only after his own death is this internal conflict finally resolved via his sons. Individually, they embody the two outmost reaches of their father’s experiences: Lyons is now a convicted felon, mirroring Troy’s past as a migrating criminal who was incarcerated, and Cory has become a decorated Marine, representing Troy’s former glories of team belonging and failed dreams of grander recognition. When the brothers meet at their mother’s house, the unchangeable past and unavoidable future choose not to collide but to surrender. Lyons displays tenderness toward Cory, fulfilling Rose’s prophetic words that the sins of the father should not be visited upon the sons. The elder brother’s affection resolves Troy’s inner battle of self-loathing, dismantling it with paternal pride and a humbling self-awareness. Here we glimpse the sons’ potential to be better men than their father was.

From personal experience, I can attest that to be a Black creator with aspirations here in Pittsburgh is an especially daunting task these days. It’s a town where the bar of creative achievement has been raised to lofty heights by its venerated son even as resources to achieve remain scant. All Black creators in Pittsburgh are essentially Wilson’s children left with a nagging, familiar question: How do we get out from under such an omnipresent shadow? Now that Hollywood has finally come calling in the form of A-list actors and talents seeking to immortalize his legacy on the silver screen, is it even possible?

Wilson and Washington actually suggest an answer in the final scene. The remaining Maxson family witnesses Gabe attempting to blow his horn in salute to the heavens. As he finally manages to bleat out a note, the clouds part and the typically gray skies of Pittsburgh give way to rays of sunshine. If you consider the plays that Wilson wrote to be his version of building a fence to keep his hometown protected, then it’s here where real life and the arts converge. In order to finally emerge from the shadow of a fearsomely talented and larger-than-life patriarch, it doesn’t matter on which side of their fences we stand, so long as we stand directly in the light.


Thanks to Washington's brilliant adaptation of FENCES it's evident if Wilson's soul has crept into ours, the experience was mutual. That’s the way that goes.