Last October at the suggestion of numerous patrons, Row House had a Robin Williams tribute week. I decided to make them a promotional poster just because, which I gave them several days before that run of movies started. I didn't even necessarily expect them to use it, since they hadn't asked for one. Then the first day that theme week began, Wayne (author, comic-book scholar, book & music critic, and all-around well-loved guy) Wise sent me a photo of a fleet of posters adorning the wall outside of their theater. I don't usually see my artwork displayed like that publicly, and it was a nice moment.

I told Brian, Row House's owner, to hit me up if they needed more original promotional art and he said they would. Brian is a very friendly and busy guy, so I didn't want to bug him about it. (It's a very narrow boundary between being the resident Norm Peterson and the resident Cliff Clavin.) But whenever I would look at their upcoming theme weeks it always inspired new ideas for posters. Given enough time and resources, I'd draw posters for them every week.

Fast forward to last week. I was over there for a showing of SINGING IN THE RAIN when I bumped into Brian at the adjoining Atlas Bottle Works. In a rush as always, he asked if I could draw them something for their upcoming SCI-FI FEST, which I'd just seen listed on their website. The catch was they needed it in only a few days for printing and distribution. Honestly, I always seem to have a ton of stuff to work on so it's not like I wasn't busy, but I also like a challenge. And I adore Row House. And the movies...BLADE RUNNER, CHILDREN OF MEN, THE IRON GIANT (which I absolutely love), PLAN 9 FROM OUTER SPACE, and TERMINATOR 2: JUDGMENT DAY...yeah, I had to do a poster.

I can't say I was stuck for an idea, but coming up with a good concept was still tricky. Unlike drawing a single person featured in a group of films, this needed to be broader in scope. The selection of movies was also so diverse that none was fully representative of the rest. I personally favored THE IRON GIANT, but didn't want to create art that might give the impression these were all animated films. While brainstorming with Wayne, he said the magic words (as he often does), "Oh! The cover for Queen's NEWS OF THE WORLD album!" and like being struck by creative lightning, I knew how the poster needed to look.

The album cover artwork by Frank Kelly Freas was based on an earlier painting he did in 1953 for Astounding Science Fiction magazine. It depicts a giant robot who has, apparently, busted through a domed building and accidentally killed the members of the band. I loved this idea, because the Iron Giant would perfectly substitute for the robot, and the characters from the other films would take the place of the band. Row House Cinema itself would be left in the rubble below. Perfect!

If people knew about the album cover, my hope was this poster would make them go, "Heeeeeey...!" and nod in approval. If they weren't familiar with the album, hopefully they would still appreciate the quirkiness of the image.


I envisioned the piece so clearly, a rough sketch wasn't even necessary (a step I didn't realize I'd skipped until it was completed). I also hoped that Brian would be cool with the concept, because there wasn't time to check in for approval. In short order, first came the pencils, then the inks...

...then I added the graytones, logos and text. Unlike the Freas piece, I envisioned this poster in black-and-white-and-gray from the start, which helped with the turnaround time as well.

What's funny is upon completion I was able to look at it objectively really quickly, which may be because it was created with so much momentum. Wayne's suggestion was brilliant, and I was very pleased with the end result.

I emailed the file to Brian and later that night he sent me his very short response: 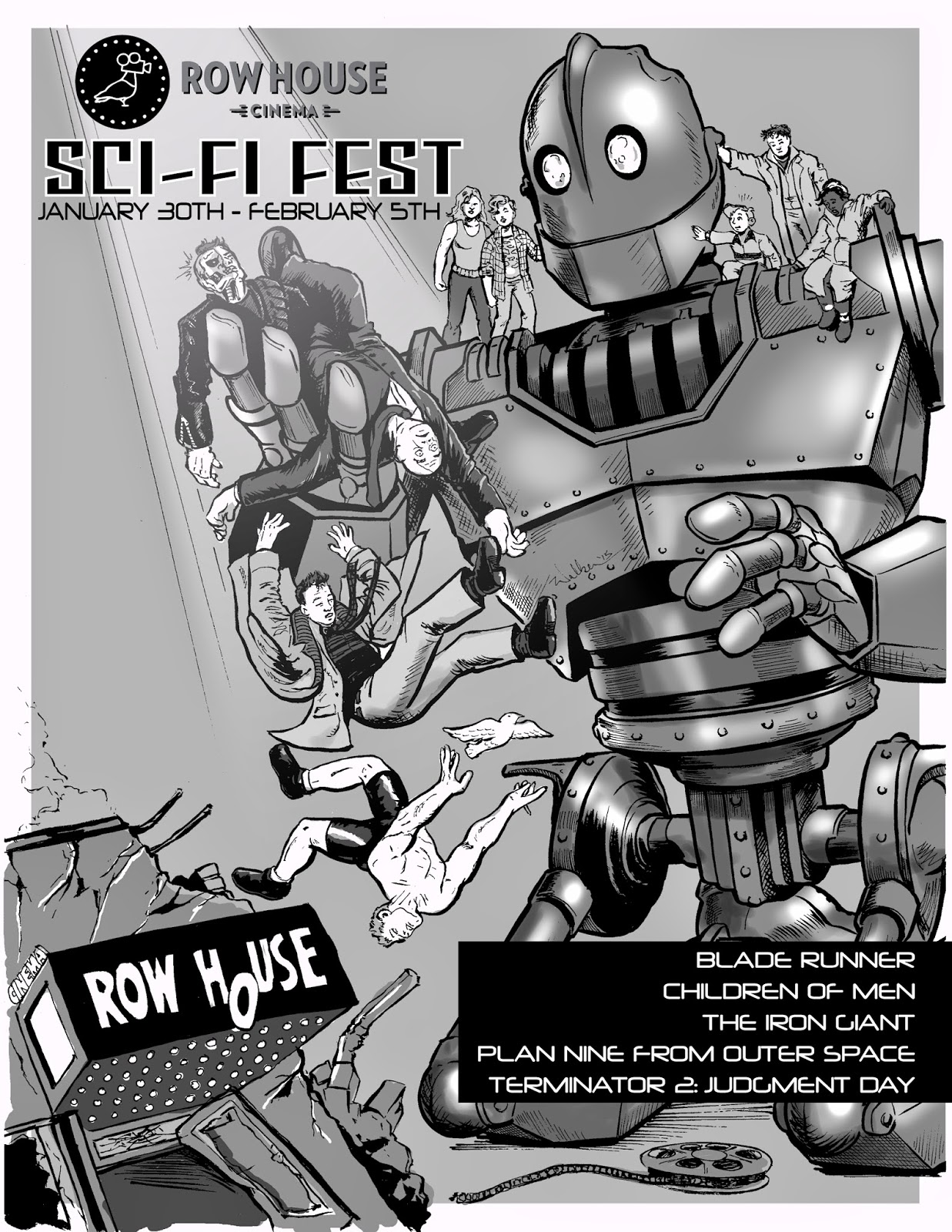 So, that's how Row House Cinema got it's poster for SCI-FI FEST, which starts tomorrow and runs from January 30th - February 5th. Come on out with some friends and grab one of the 83 seats (minus my favorite, which is unofficially reserved) and some popcorn, and a beer or cider and check out a movie. You work hard. You deserve it.

And if you need company, just shout out "Marcel!" when you arrive at the front doors. I want to go where everyone knows my name.