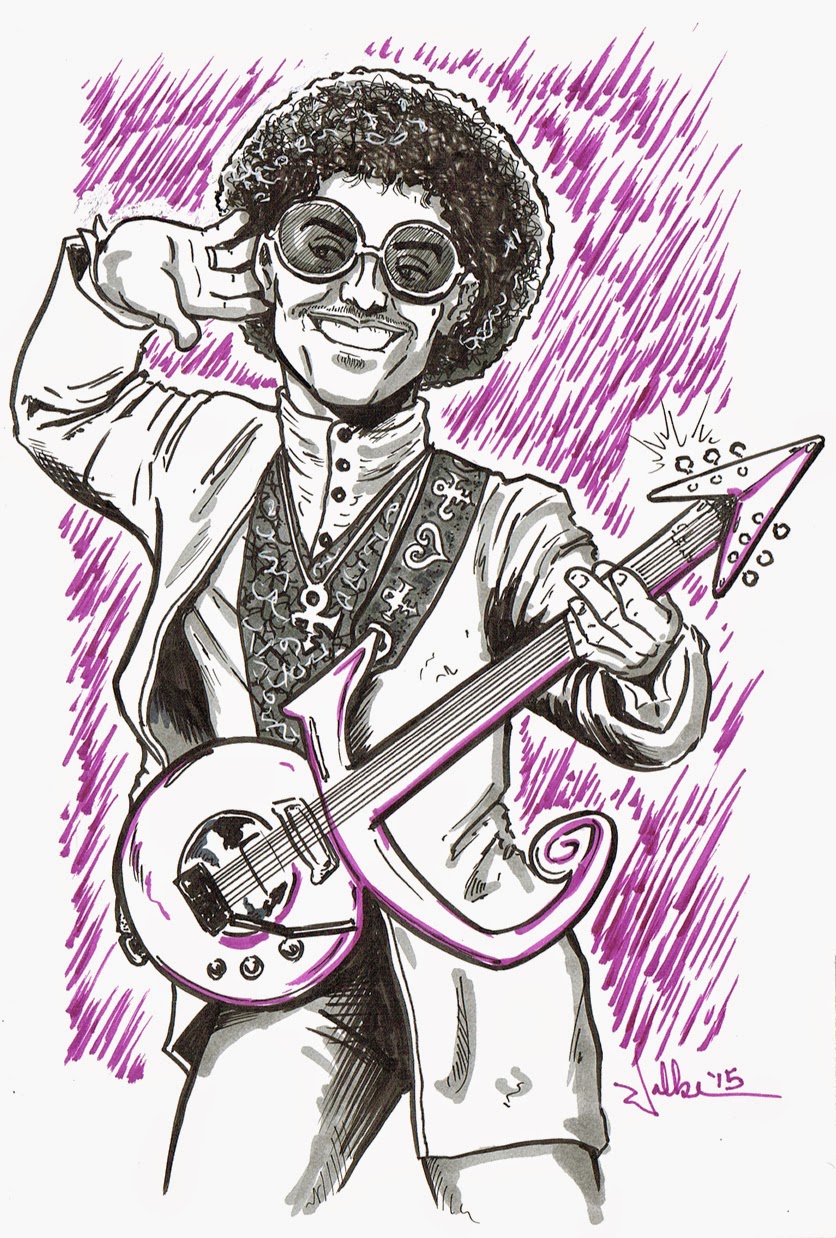 It was brought to my attention a couple of days ago via a post on my Facebook wall that Prince will be performing a series of "pop-up" concerts  in the United States this year, under the banner of his "Hit and Run Tour". And you know, that's pretty doggone cool. I haven't seen him live since 2004, and the notion that he might end up back here in Pittsburgh is something to look forward to.

Wayne made a joke about Prince performing in our living room, then asked me what songs would I include on the set-list if I had the opportunity to host such an event? I have to admit, the question gave me pause because I do loves me some Prince. I was a child of the 1980s, and vividly remember the buildup to his domination of the pop landscape of 1984. He has remained on my radar since, through highs and lows, and he's still in the game. His recent performance on Saturday Night Live (not to mention his already fabled after-party performance following their 40th anniversary show) cemented his reputation as a must-watch live entertainer.

There is only one Prince. He's the only person on Earth over twelve years old allowed to use letters and numbers instead of words in his writing who I will still take seriously. So what if he did perform a concert in my living room? Quantum mechanics suggests the possibility of innumerable dimensions branching off from one another where anything that you could possibly conceive of as a reality exists. Therefore it is theoretically possible - I would even suggest it is likely - that a dimension and universe exist where Prince will be playing a short concert in my living room. That means I should be prepared if it turns out to be this one.

I asked Wayne how long such a show would be, and he said one hour. Assuming I have a little latitude for applause time, encores and such, here's what I came up with. (I even created a playlist on Spotify, if any of you are so inclined to listen along.) This doesn't reflect what I consider to be the Ultimate Prince Songs or even my Favorite Prince Songs (and trust me, I left off notable ones), but just what I think would be the most fun, eclectic mix to hear. I should also mention that I'm a bit of a control freak, and given a chance would even suggest orchestration and arrangements.

Hey, this ain't Paisley Park. This is my house party and I'll rock it how I choose!

MY NAME IS PRINCE (LOVE SYMBOL, 1992): Prince’s early ‘90s retort to the bravado of gangsta rap still serves as a perfect opening performance salvo and personal purple mission statement. We wouldn't need the entire song either, because once declaration of the intent to funk has been made, it will be known that His Royal Badness has come to play and make us say his name.

LET'S GO CRAZY (PURPLE RAIN, 1984): This. Is. The. JAM! If you are at all like me, you recognize the opening organ keynotes of this song instantly. Prince's effortlessly cool spoken sermon intro is like the Preamble to the Constitution of Funk & Rock. Do I actually want to find his Purple Banana? Probably not...but oh no, let's go!

WHY YOU WANNA TREAT ME SO BAD (PRINCE, 1979): For some reason when folks go and treat Prince so bad, he ends up treating us to some of his best music. This song has a wonderful early guitar solo that signals the decades of Minneapolis cool he would unleash on his adoring subjects. It also ends with another whirling guitar solo that would serve to spiral perfectly into the opening chords of the next song...

GUITAR (PLANET EARTH, 2007): Probably the most sincere love note Prince has ever composed. It should be noted though that just because he loves his guitar, that doesn't mean he hasn't made it cry on occasion, as evidenced by the next song on the playlist. (See? I'm so clever!)

WHILE MY GUITAR GENTLY WEEPS (ROCK & ROLL HALL OF FAME, 2004): Prince may be a tiny guy, but he towered over other rock luminaries at the Rock & Roll Hall of Fame Awards with his shimmering guitar work during this live performance. You could see they didn't even mind being upstaged. Anyone who had taken his musical prowess for granted over the years was hereby reminded that Prince can shred with the best of them. His guitar was likely weeping tears of joy by the end. For the sake of expedience, all he has to deliver for my concert is the solo.

KISS (PARADE, 1986): "You don't have to be beautiful to turn me on," Prince declares at the outset of this tune. If you've paid even the slightest bit of attention to his companions over the years, from Vanity to Anna Fantastic, you know this is hypocrisy to the highest degree. But in his defense, I can personally attest to an instance when someone beautiful did not merit a kiss from a charming Prince: when he performed this song in Pittsburgh in 2004, a parade of pretty local ladies were brought onstage to dance with him. As he pranced between them all, one determined gal motioned to try and get him to kiss her on the cheek.

Lesser men would have certainly agreed. Prince however just smiled, wagged a finger and danced away, all the while still singing. I remember thinking, "Ouch! She just got dissed onstage by PRINCE!"

Any ladies attending the concert in our living room will be restricted from such folly though. We aren't insured if your lips or feelings get burned.

7 (LOVE SYMBOL, 1992): It would seem rude to invite Prince to my house to perform a set and not include songs he would enjoy playing. He loves to beckon audiences to sing along, and this one seems designed for that express purpose -- he even kicks it off by going over the infectious refrain for us, not once but twice. (He really wants us to sing it!) With ample room to groove, I can’t imagine Prince not having fun performing this. This Indian-tinged vision of Paradise will leave a smile on everyone's faces. And if Prince is happy, then we’ll all be happy.

7 is also the seventh song in the set. I'm a perfectionist, so this makes me happy.

SHE'S ALWAYS IN MY HAIR (B-SIDE, 1985): It's the lyrics that make this song so great. Listen to how resigned Prince is, even as he admits the titular love interest is, you know, always there. His tone is at once appreciative and annoyed, bemused while he muses. Maybe he should stay with her - heck she's along for the ride anyway no matter what - or maybe he should run away as fast as his high heels will carry him. You've got me. Normally applauding such emotional indecisiveness would be ill-advised, but in this case it's worth listening to him comb through his feelings.

PARTYMAN (BATMAN, 1989): Even though it rarely is mentioned as a part of his discography these days, the incredibly successful BATMAN soundtrack album was hailed at the time as a “comeback” effort. In truth, Prince had never gone anywhere. I suspect audiences mostly liked his return to straightforward Minneapolis-infused pop. This was really the track that rocked the whole world – North, East and South – and if Candy Dulfer’s horn comes blowin’ in from the West, then it really will be a party, man!

17 DAYS (B-SIDE, 1984): I possibly loved this track more than its famous A-side sibling When Doves Cry. The rolling guitar work echoes the refrain, "So, let the rain come down." Patience, loyal subjects, patience. We're almost there.

VENUS DE MILO (PARADE, 1986): This short, under-appreciated instrumental would serve as a perfect chaser before reaching the *ahem* climax of the evening. The arrangement would lend itself nicely to a piano introduction into the next piece (hint-hint)…

PURPLE RAIN (PURPLE RAIN, 1984): …In the movie, there’s a brief scene where Prince privately plays the opening chords of this on a piano prior to the full version onstage with the band. Because of that short moment, I have longed for a piano version of Purple Rain for years. I'm a child of the 1980s, and this was his ultimate song -- I couldn’t live knowing he didn’t play this in my house if the opportunity arose.


Here is the original live recording of "Purple Rain" at 1st Ave!!
Posted by Raphael Deas on Wednesday, July 2, 2014

Now, assuming Prince indulges me with an encore (because I'm such a gracious host, of course), here's what I'd love to hear...


A MILLION DAYS (MUSICOLOGY, 2004): I really like Forlorn Prince. A lot. If it were the holiday season, I would make him perform Another Lonely Christmas ad nauseum, and that's about the only song in his oeuvre that sounds like he needs to get laid. Yeah, I like him pretty much defeated. A Million Days is great because it sounds like he screwed up and he knows it, and is begging for one more chance. I often loop this song, maybe hoping he'll be forgiven. Alas, Prince is always left a pauper at love.

DIAMONDS AND PEARLS (DIAMONDS & PEARLS, 1991): For the most part, the songs on my chosen set-list are uptempo. If there is a thread of narrative to be found - someone out there has been treating Prince bad, making his guitar weep, getting into his hair, not answering his phone calls, etc. - I like to think of this song as the redemption to the affair where they KISS(!) and make up. The inimitable Rosie Gaines shares vocal duties with Prince on this song and it soars at its crescendo.

I COULD NEVER TAKE THE PLACE OF YOUR MAN (SIGN O' THE TIMES, 1987): This is just me being greedy, but I love this song. At 10:35 on a lonely Friday night, the narrator is actively avoiding a one-night stand with a pretty hot mess, and it sounds like some pretty good judgment. Still, when you hear about the last guy this gal was with, I think Prince would measure up even without his heels. You don't have to take another man's place, Your Funky Highness -- you are the Man.

So there you have it, folks. Now if you'll excuse me, I need to stop regaling you with purple prose and get to cleaning the house. If Prince decides to drop in unannounced while on tour, we'll need more room to accommodate him. Otherwise, we'll probably end up with a Housequake, and I don't want the neighbors pounding on the walls. I can practically hear them now...