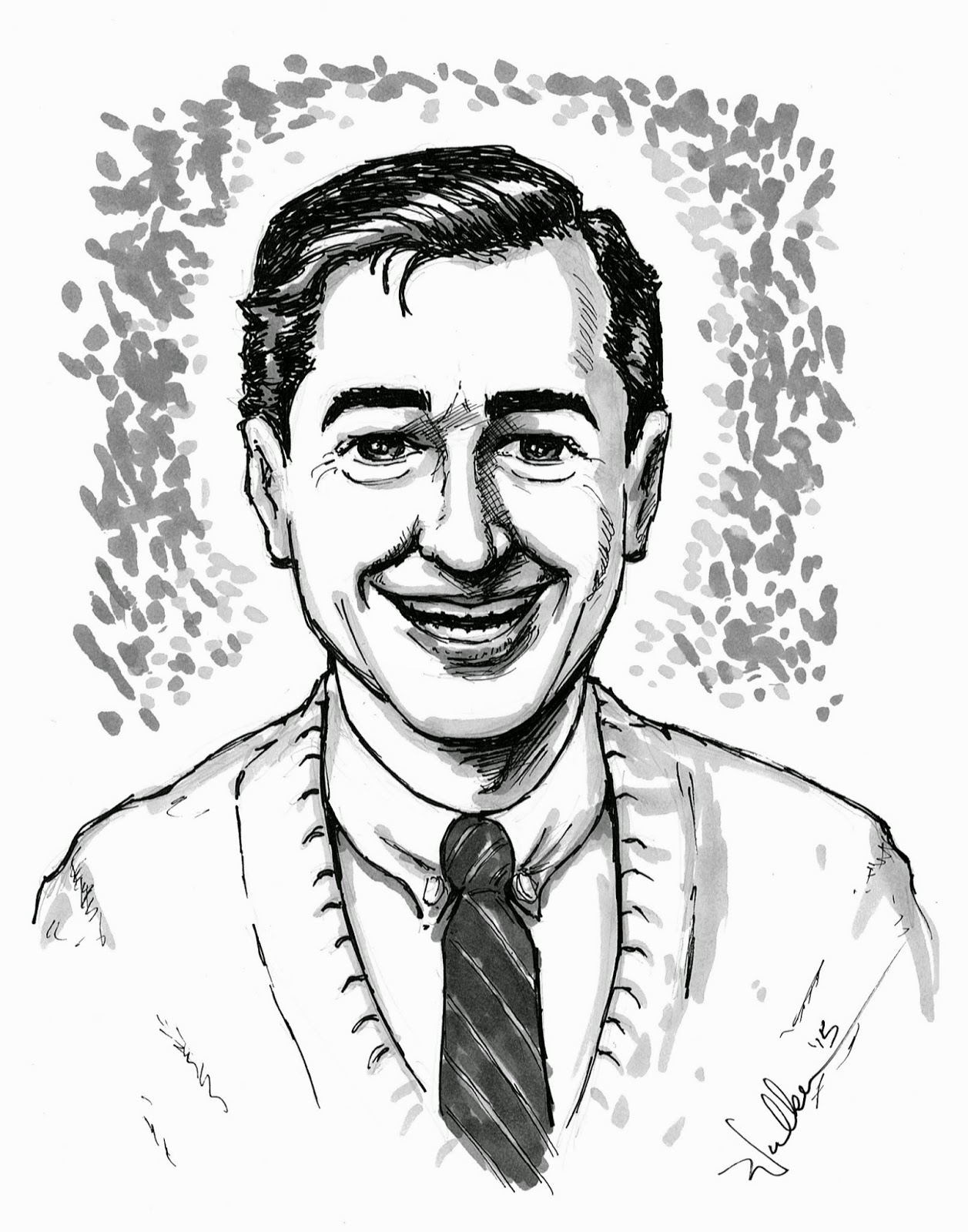 TOMORROW IS FRED ROGERS' birthday, so he's been on my mind lately. (He would have turned 87.) I was one of millions of children who were blessedly raised on his long-running show MISTER ROGERS' NEIGHBORHOOD and I was faithful. I watched that show from the time I was around five years old until into my twenties. Even now I'll catch an episode here or there as a reminder of where I came from and how much I absorbed his lessons without even realizing it. I didn't know when I was little that the show was filmed right here in my hometown of Pittsburgh. Even now, knowing that something so important to so many people for so many years originated right here where I live remains a little stunning to me.

Last summer I was up late one night when I came across episodes of his show online. I watched one that I dimly remembered where he went to buy a new pair of dress shoes. He invited us along as he took a trip to visit a friend who owned Wagner's Shoe Store, and he bought a new pair. I paused wondering if this was the same store residing only a few blocks from my house in Lawrenceville. So at 1 in the morning, I pulled on my own pair of sneakers and walked over to see if my suspicions were correct. The facade has changed a lot over the years, so I had to do some more checking online to make sure, but yes, it's the same store. I was walking on the same ground that one of my earliest heroes had walked on.

I learned a lot from him. Today it occurred to me just how much I learned.

WHILE PASSING THE time at the laundromat this morning, I saw that other people were thinking about Fred Rogers too. The Huffington Post posted an article today about him, conjecturing over his place in Heaven. In my mind, the fact that he would be there is a foregone conclusion, but I was curious where this would lead. They explored his beliefs about Heaven and Hell and God's role in deciding where we end up when we die. Needless to say, Mr. Rogers was pretty consistent in his words and actions, both onscreen and off. While he may have taken us repeatedly to the Neighborhood of Make Believe, he also delivered honest doses of reality in equal measure.

The article concluded that Fred Rogers would have to now be in the Heaven that he believed in. The God that he spoke of believed in the best in people, no matter how poorly they acted. Everyone embodies potential in His eyes; He is the Great Appreciator, and there is room in his Kingdom for everyone. After all, He loves us just the way we are, and Mr. Rogers always preached that gospel.

I wish I was as forgiving and charitable in my opinions of humankind as he was, but I'm not. I do believe that some people are truly evil. They are few and far between, thankfully, but I think there are some people who can not be reached by anything other than divine intervention, and they would probably be resistant to that too. This thinking coupled with my own Christian upbringing led me to believe for the longest time that in the afterlife a good spirit would go one place and an evil spirit would go somewhere else. Those places weren't defined by anything as pedestrian as clouds and fire, but there had to be some sort of delineation between where one would go.

It just didn't seem logical to me that a person who had spent their life causing pain to others would be rewarded the same way as a person who had striven to be good. Because if that were so, what's the point in being good?

Then I remember having a discussion about this at work one day, years ago, and a friend said, "I don't believe there is a Heaven or a Hell. I think that wherever you go afterwards, if anywhere, it's the same place." And you need to understand, this is someone I loved and respected a lot. So her statement perplexed me. She was far too intelligent a person for me to dismiss her reasoning, but it ran contrary to everything I believed. Could there be something I wasn't considering?

In time I was actually able to reconcile my own beliefs with hers. I am still a Christian, and I believe that wherever our spirits go to when our bodies die - whatever level of existence that may comprise - it's the same place for everyone, and we retain who and what we were upon arrival. Much like Fred Rogers talked about, I believe it's a place where things open up for us and we get much more perspective on everything, like an ant that's been living in a balloon all its life. The balloon is (((POPPED!))) and suddenly...there's so much more.

And that's where you get to see what the effects of how you lived your life are. If you tried your best to do right by others, you'll see the magnitude of those unfolded blessings...and that will be your Heaven. If you were selfish, and showed disregard for others, you'll see that too...and that will be your Hell. In both cases, it will have been of your spirit's own making.

Imagine meeting Fred Rogers in that sacred place, seeing him for the truly special person he was, seeing all the good he did in his life by helping others. Imagine you've spent the blessing of your life bringing others down, then seeing the harm you've caused, and then meeting someone who did it all as correctly as humanly possible.

That would be Hell.

And I'm imperfect enough to hope a number of people are there. That said, I know that Fred Rogers has long since forgiven them, because in Heaven that's just what you do.

I'M NOT AS gentle a person as Fred Rogers was, but he taught me well and I have my moments. I remembered one this morning. 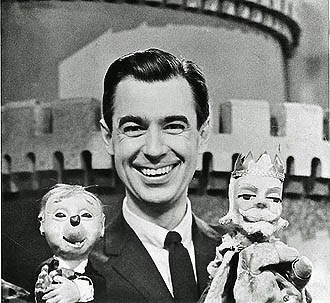 I was teaching a series of art classes in a neighborhood middle school as part of an outreach program. Two days a week I would go into classes with the kids and explain to them how I learned to create comic-books and tried to develop some rudimentary skills with them doing the same. Overall, they were good kids and I enjoyed the classes. Some of the students were a bit of a handful, but out in the grown-up world so are adults.

One day, my supervisor from the Pittsburgh Center of the Arts came to observe me at work at the school along with a colleague visiting from out of town. They sat quietly at the back of the classroom as I began my typical talk-talk-talk-talk-DRAW routine, walking through the rows of seated students as I did. One student was particularly wound up. He struck me as being hyperactive, and he and the regular teacher had an antagonistic relationship. While I talked, I could see him squirming and fidgeting, but I didn't want to stop and call him out as she often did. That seemed too disruptive.

What came next was so instinctive on my part that I forgot about it until it was mentioned to me later by my supervisor. I simply walked over to the boy and touched him on his head while I kept speaking. He immediately turned around, without a fuss, and became attentive for the rest of the class. When this was brought up with admiration by the supervisor, I realized it was a common method I had developed for getting the kids' attention when they acted up, and it usually worked. But it hadn't come out of nowhere.

Using patience and attention to get people to settle down and behave. Thanks for that life lesson, Mr. Rogers.

I DO BELIEVE that most people, young and old the world over, are going through life trying to do the best they can. But some people are out there as touchstones of grace, and we need as many of them as we can find. Fred Rogers is gone, but thankfully his lessons live on in every single child who watched him for a half hour a day throughout the years. And even though Wagner's Shoe Store is still in business, you don't need to purchase a pair of their sneakers to walk a mile in Mr. Rogers' shoes.

Several years ago, people across the country were encouraged to don cardigan sweaters on March 20th in recognition of Be My Neighbor Day, and that tradition continues. I invite you all to do the same tomorrow and at some point during the day take ten seconds to think of all the many people who have loved you into being the people you are, the people who thought that you are special.

As one of the people I will be thinking of once said, "May God be with you."

He always is...and it's such a good feeling.